Bridget from Now Novel has once again written a helpful blogg, which I can’t wait to share. Extremely relevant to me at this point as I rework the first book of The Fortune Seekers – Dan and Charlotte, and continue writing book two of the series. (To be published in 2017) 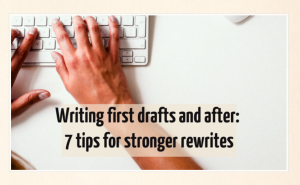 Writing first drafts of novels is challenging and completing your manuscript is a major achievement. Even so, if you end NaNoWriMo with a manuscript in hand, or you finish a book at your own pace, this is only a first step.

Read 7 tips for crafting a strong rewrite in the editing and revising process and turn a perfunctory rough draft into a cracking page turner:

1. Make a list of words, phrases and scenes to cut

2. Make sure every part of your first draft contributes to the whole

3. Revise your rough draft to make the 5 W’s of story stronger

4. Get feedback on the cohesion and clarity of your first draft’s scenes

5. Use hindsight to fix incongruous details of plot, setting or character

6. Rest after writing a first draft so you can reread with new eyes

7. Type your novel’s first draft out anew and read aloud

Let’s delve deeper into each of these post-drafting ideas:

1. Make a list of words, phrases and scenes to cut and replace

The purpose of drafting is to get the story down in its most elementary, functional shape. Incidents of plot and characterisation and the basic flow of your story are there. The language isn’t necessarily burnished, though. Perhaps it doesn’t shine – yet.

When your first draft is complete, make a list of words and phrases to cut or substitute. If you have specific adjectives you typically reach for when describing certain characters or types (e.g. ‘beautiful’ for love interests or ‘cruel’ for villains), think of some alternatives that could add variety and specificity to your descriptions.

Words and phrases to substitute or cut:

– ‘He/she/they said’ – if you can show who is speaking within a scene through other means, keep dialogue tags to a minimum. Make tags carry descriptive weight (e.g. a sulky character could ‘mumble’ rather than merely say their lines). Avoid getting too creative with dialogue tags, though. Let characters’ words themselves convey tone and mood as far as possible.

– Wordy phrases – the most compact phrase is often best. Make sure you say. ‘She returned’ rather than ‘she went back’.

– Cut the adjectives-plus-weak-adverb combo. Although adverbs such as ‘very’ have their place, they often lesson descriptive ‘oomph’. Instead of saying a character speaks ‘very slowly’, you could use an all-in-one verb, e.g. ‘drawls’. Example sentence: ‘While he drawls at the lectern, she peeps at her watch’.

See the excellent guide Janice Hardy shared with us on cutting words from a manuscript that’s too long. Even if your manuscript is a good length, it should help you tidy your first draft.

Besides individual words and phrases also think about non-essential scenes that could be cut. This means ensuring every scene serves a purpose for the overarching story:

2. Make sure every part of your first draft contributes to the whole

Often a first draft contains scenes that aren’t completely clear in intent. A conversation between characters might circle around a plot point without saying anything particularly useful or telling the reader anything new or edifying. After the first draft, you have the opportunity to modify or remove these scenes that slow down pace and weaken narrative tension.

As you revise your novel’s rough draft, ask yourself for every scene:

-Why is it necessary to show the reader this scene?

-Does this scene answer a previous question about the events of the story or raise any new ones?

This third question is important. If you get bored while reading through your draft, it could be that the scene is indeed boring (and not simply because you’ve read it over many times). Two ways to liven up a dull scene are to give a greater sense of purpose and direction through action (‘x’ surprising or dramatic event happens) or dialogue (characters converse on an important or illuminating topic).

If you do feel at all bored while reading through your first draft, strategize how you will strengthen the 5 ‘w’s’ of story and make them more interesting:

3. Revise your rough draft to make the ‘5 W’s’ of story stronger

Many of the greatest stories ever told have this in common: They treat all of the ‘5 W’s’ of story – who, what, why, where and when – with equal care. Charles Dickens’ London, for example, is as much a character as his characters are. In a novel by Toni Morrison or Margaret Atwood, characters’ choices and actions unravel sequences of events with all the inevitability of natural law.

As you revise your first draft, keep these 5 elements in mind. Ask yourself:

-Is my setting clear?

-Can you picture where my readers are and does this backdrop contribute to the overall tone and mood?

-Are the reasons for story’s events clear?

-Does the ‘why’ of characters’ actions and choices make sense in light of their motivations, goals and backstories? (We feel confused when characters act ‘out of type’ with no explanation)

-Is the ‘what’ of the story clear (are its themes and subjects consistent and developed? For example, in C.S. Lewis’ Narnia series he teases out themes of power and corruptibility over the entire series arc)

-Is the cast of the story’s characters fitting (do minor characters’ parts add to rather than distract from the main plots and subplots that form the core narrative)?

-Does the ‘when’ of the story make sense (is the time setting consistently shown through description and narration? Are the events of the story in the most logical or interesting order or sequence?)

As you reread your manuscript, note in the margin wherever one of these elements needs improving. Keep a list of any necessary fixes to make for each – who (characters), what (subjects and themes), why (reasons or cause and effect), where (setting) and when (time setting and story event sequence).

4. Get feedback on the cohesion and clarity of your first draft’s scenes

Getting from a first draft to a final draft is possible without external insight. Yet having a second (or third) pair of eyes to give you honest feedback often helps you see where clarity and cohesion is lacking.

This is where getting critiques (from your offline or online writing community) is valuable. One of the advantages of online critiques is that you can share your work anonymously if you feel uncomfortable attaching your name to something that is not yet in its finished form.

Often when you’ve finished writing a work of fiction it all makes sense because you’ve lived with the characters and the story’s events. You may have supplied any missing links in your own mind. Another reader who doesn’t have the author’s access, however, might spot gaps and missing explanations you’ve glossed over due to your own deep involvement.

5. Use hindsight to fix incongruous details of plot, setting and character

The advantage of rewriting after you finish writing your first draft (rather than as you go) is that you have the long view of the story, from start to finish. With the sweeping overview this affords, you can take events that occur towards the end of your first draft and weave in their foreshadowing and their origins earlier in the book.

Being able to work backwards and forwards in time like this lets you turn a linear story into something with a more interwoven, complex structure. A good example of this type of storytelling (though not a book) is the TV series Arrested Development. The writers cleverly placed humorous incidents early in the series that only become funny in retrospect, once their significance is revealed by later events. In this way the series rewards re-watching.

Similarly, you can place earlier incidents in your novel’s plot that make new sense or add layers of meaning in light of later events. This deep structure rewards re-reading.

Being able to look back over your whole first draft makes it easier to spot plot developments, setting details or character actions that don’t quite fit with the whole. To truly understand any gaps or inconsistencies, outline your novel after the fact. Create a summary, chapter by chapter, of what you’ve written. Condensing events this way will give you a clearer perspective of your story’s total structure.

6. Rest after writing first drafts so you can re-read with new eyes

It’s vital to rest between completing the first draft of a novel and starting to revise and rewrite. A short break gives the details of your story and your characters time to settle and sink in. The partial forgetting that happens makes it easier to put on an editor’s glasses and think of your story more objectively than when it is still new and recently-formed.

Take a week or two to focus on other projects. At the end of an intense drafting process like NaNoWriMo, you’ll likely need a rest from intense mental activity. Don’t leave the rewriting too long, though. Another way to shake yourself out of a habitual process of reading your draft is to read from end to start or last page to first. This is useful for proofreading, as you’ll focus more on the sentence structure and language and not be distracted by the linear flow of narrative events.

7. Type your novel’s first draft out anew and read aloud

When you rewrite your book’s first draft, actually type your rewrite into a new document. This will help because you won’t simply move around existing text but will think about each line due to the retyping. This might sound time-consuming, but it is an effective way to catch any glaring faults.

Also read aloud often, especially when you rework dialogue. This will help you catch any awkward or clumsy turns of phrase. Small revision and rewriting strategies such as these will make writing first drafts and polishing them a creative and intentional (rather than autopilot) process.

Do you need constructive feedback on your first draft? Get feedback from the Now Novel community or find a writing coach who will lend support and guidance as you progress from first to final draft.
Thats all from me now until after Christmas. Have a happy, relaxing time over the Christmas break.

New Zealand author, blogging and researcheing family trees. I write fiction ally about historical families, focusing on the challenges, social issues and indiscretions that caused major disruptions in ancestors lives. My aim is to create realistic reality by bringing greater understanding to our generation. Follow The Journeys of the Fortune Seekers Series of novels written by Annie Browne. Book 4 underway. I also write as Glennis Browne. View more posts