Hi writers, my rewrite has been forwarded to the editors. Zoom! Off it went! A relief to have completed the revision. Now time to put my head down after my grandkids leave ( it’s term holiday and we are skating and surfing during the days), so a short break then into it. Love to hear how your writing is going. Glennis

A well-structured story is satisfying to read, as independent parts feel cohesive and related. Read a definition of story structure, followed by effective story structure examples and the tips they suggest:

What is story structure?

The Oxford definition of structure – ‘the arrangement of and relations between the parts or elements of something complex’ – gives us a starting definition. In a story, structure is the arrangement of (and relation between) scenes, chapters and parts. For example, in Toni Morrison’s Beloved , (1987) the author starts each sentence of the novel’s three parts similarly, describing the nature of the haunted house that is the primary setting. This repetition reinforces the novel’s structure.

Let’s explore examples of story structure and tips they yield:

1: Use repetition to build tension

A key building block of story structure is repetition. Repetition in stories has roots in oral culture. Repetitive elements would enable memorization for retelling, before print culture.

A classic example of using repetition for tension is the children’s fable, ‘The Three Little Pigs’.

In the story, three pigs terrorized by a wolf each build a house to hold him at bay – one of straw, one of sticks, and one of bricks. The wolf destroys the first two houses, devouring the pigs.  The third pig outwits and devours the wolf instead, by building a brick house.

The reason this simple story has delighted children since at least 1840 is the simple repetitive structure builds tension and suspense. We see each interaction, and the first two outcomes (the antagonist winning) create suspense. There is a plot reversal, however, when the third pig thwarts the wolf.

Many modern thrillers and fantasies have similar structures. In a murder mystery, for example, a killer might pick off secondary characters one by one. As we see each new crime scene, we feel the increasing tension of the killer’s unchecked success. They might start to seem unstoppable. This raises stakes.

To create effective tension through repetition:

1 Raise the stakes: In a murder mystery, perhaps the killer’s pool of victims draws closer to the detective’s circle of friends or colleagues, for example.

2 Vary settings and the rules of engagement: In Rowling’s series, the main villain appears in different guises and places, adding a tense element of novelty and difference to the repeated showdowns.

Repetition in story structure is also useful for comedic effects:

Besides tension, repetition in story structure is a great device for creating humour.

Take the famous Spanish classic, Don Quixote (1615). Although more than 400 years old, it’s widely regarded as one of the best novels ever written.

The story follows a man named Alonso Quixano who has read many romances about valiant knights. When he loses his sanity, he sets out to live a life of chivalry.

Don Quixote renames an ordinary neighbouring farm-girl Dulcinea del Toboso, imagining she is his ‘lady love’. He imagines an inn is a castle, addressing the resident prostitutes as courtly ladies. He gets badly beaten in a fight when travelling merchants insult his (unknowing) love, Dulcinea.

Each repeated instance of his delusional behaviour is made funnier by the viewpoint of Sancho Panza, a simple farmer DQ recruits as his squire. Through this device, we see the ‘objective’ reality (the plain inn) through Sancho’s eyes alongside the Don’s wild re-imagining.

To use repetitive story structure for comedy:

1 Repeat with variation: Alonso Quixano starts by giving himself, his horse and his neighbour romantic names. Each time we read about him renaming something ordinary with a heroic or romantic, ridiculous name, it becomes a little funnier.

2 Create irony: Repetition enables you to emphasize ironic elements of your characters’ behaviour. For example, Cervantes describes Don Quixote’s ‘noble steed’ as actually exhausted and decrepit. Reality contrasts starkly with his imaginary world, and repeat revelations of the wild differences between what Don Quixote perceives and what his sidekick perceives increase the laughs.

Repetition is also key in tragedy. In typical tragedies, the repeated personal failures or mistakes of protagonists lead to dire outcomes.

Besides repetition, what are other important elements of story structure?

Well-structured stories have arcs – rising and falling trajectories as characters set off in search of their personal or shared goals.

For example, let’s examine a classic ‘Rags to Riches’ story, the fairy-tale ‘Cinderella’. While there is a net ‘rise’ in this story type (from lack to having), it’s worth noting that some stories begin with a rise and end with a fall (e.g. tragedies).

You could summarize Cinderella thus:

1: Cinderella has her first misfortune: The death of her biological mother and her father’s remarriage, resulting in Cinderella being mistreated by cruel stepsisters.

2: Cinderella finds supernatural help and comfort: After Cinderella plants a hazel twig her father gives her on her mother’s grave, it grows into a magical tree. When she prays beneath it, a white dove delivers her wishes.

3: The Prince enters the story:When the local king announces his son is holding a feast to find a bride, Cinderella’s stepmother won’t let her attend. She throws a pot of lentils into the ash of the fireplace and tells Cinderella she can attend if she picks them all up individually. Cinderella achieves the task with the help of a flock of white doves.

4: Cinderella prays under the tree for fine clothing to attend the feast: Her wish is granted and she attends the feast, dancing with the prince. When he accompanies her home she escapes. The next day, she attends another day of the feast in even finer clothing. Her golden shoe is caught in a trap of sticky pitch laid by the prince and he keeps it, determined to find its owner.

5: The prince seeks the mystery girl: He makes women in the surrounding lands try on the slipper. The cruel stepsisters cut off their toes to make the shoe fit, but the white dove alerts the prince to blood on the slipper. He returns and eventually finds Cinderella, sees that the slipper fits, and recognizes her (through her ordinary servant’s clothes). They’re married. The white dove blinds the cruel stepsisters as they’re leaving the wedding ceremony.

We can condense the above into a graphic illustration to gather core insights into story structure:

Here is a graphic summary of Cinderella’s story arc: 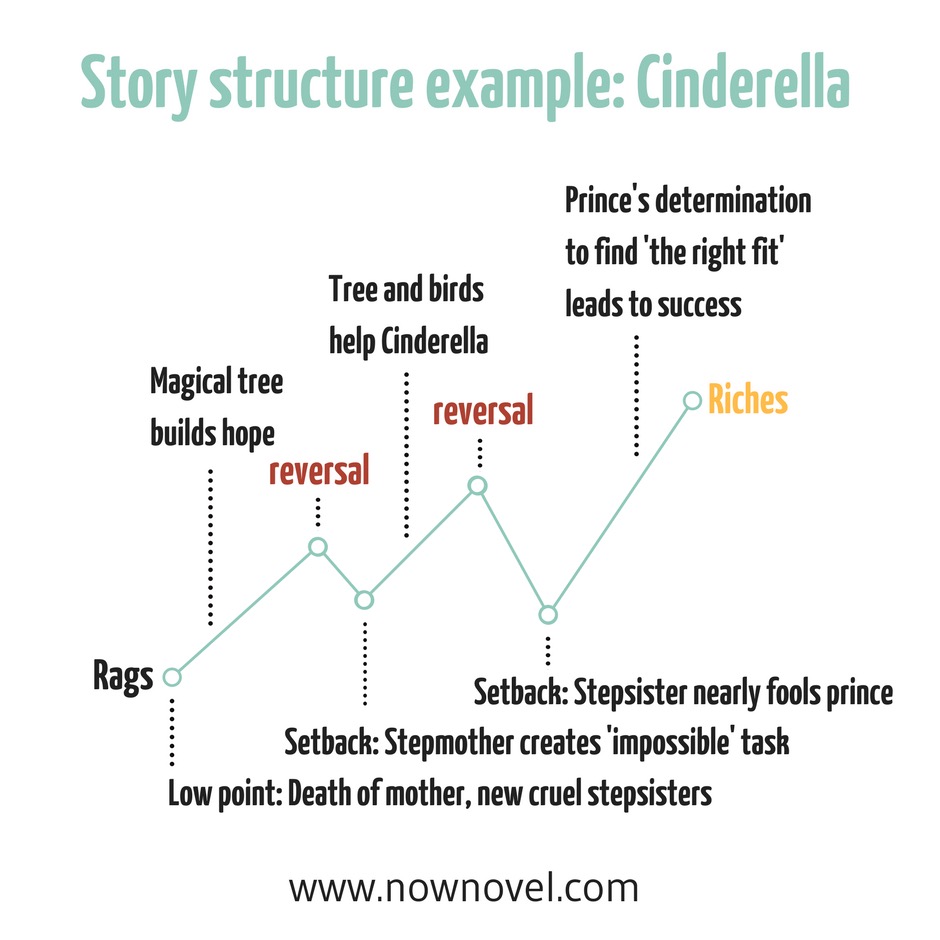 From this we can gather some useful points on story structure:

• Reversals add tension and intrigue: The reversals or turning points wrought by the stepmother and stepsisters take Cinderella further from the ‘Riches’ end-point in her arc. This creates tension as love and liberation sometimes seem further away than before

• There is repetition with variation: The structure of the story is built around repeated elements – the cruel acts of Cinderella’s new family and the ways the spirit of her mother (via supernatural means) guides her to overcome these varying setbacks (‘The Impossible Task’, ‘The Usurping Stepsister’)

As you draft your own story, create the occasional diagram of your own character and plot arcs. How does tension increase and decrease? Do events bring characters closer or further from their goals? Creating variety through repetition, variation and reversals will ensure your story isn’t ‘one note’.

New Zealand author, blogging and researcheing family trees. I write fiction ally about historical families, focusing on the challenges, social issues and indiscretions that caused major disruptions in ancestors lives. My aim is to create realistic reality by bringing greater understanding to our generation. Follow The Fortune Seekers Series of novels- Dan and Charlotte and Power and Authority. Books 3 and 4 underway. I also write as Annie Browne. View more posts